Odessa is famous for its ancient streets and atmospheric courtyards. In the center there are many attractions, known to every citizen of the city and many tourists. But what to do if you came all the popular places far and wide, but dwell on it you do not want to? In Odessa, there a few little-known places, but no less remarkable.

This street disadvantaged place before. It is home to the lower strata of society, as well as related criminal personality. Adherents of aesthetics in its classic sense is a place best avoided, because there reigns ruin and decadence. 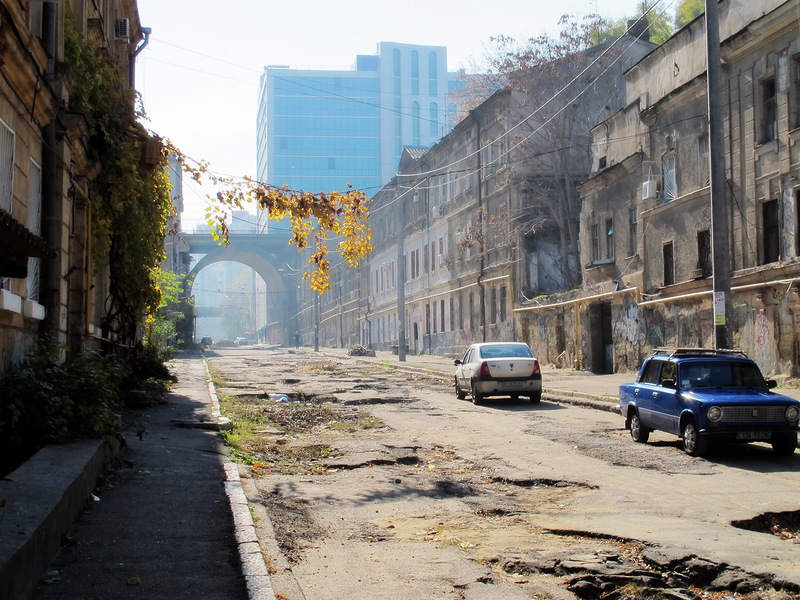 Nevertheless, the place is popular for shooting videos and photo shoots. Devolanovsky descent can be seen in the frames of several movies.

Street crosses three bridges – arched bridge Novikov, metal Kotzebue with wrought-iron fence and a monumental arch bridge Stroganov. If you walk towards the sea – a splendid view of the port.

The walls izrisoval graffiti (street can rightly be called the biggest gallery of street art in the city), some of them still hang signs and announcements. Once there were shops, and even a veterinary clinic. 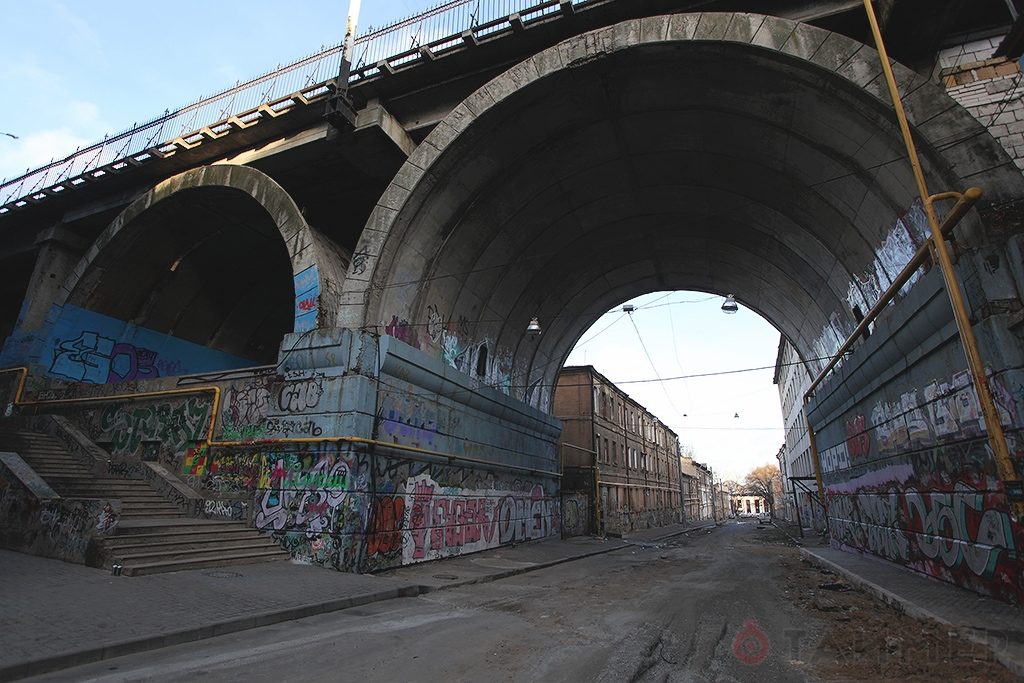 Of notable buildings – abandoned casino Cristal Palace in the house №11, atmospheric workshop, located in the garage and a courtyard apartment building №1.

If you look in the yard – you can see a gallery of unusual paintings, mosaics and improvised sculptures that will cheer up after a gloomy abandoned buildings and debris around them. 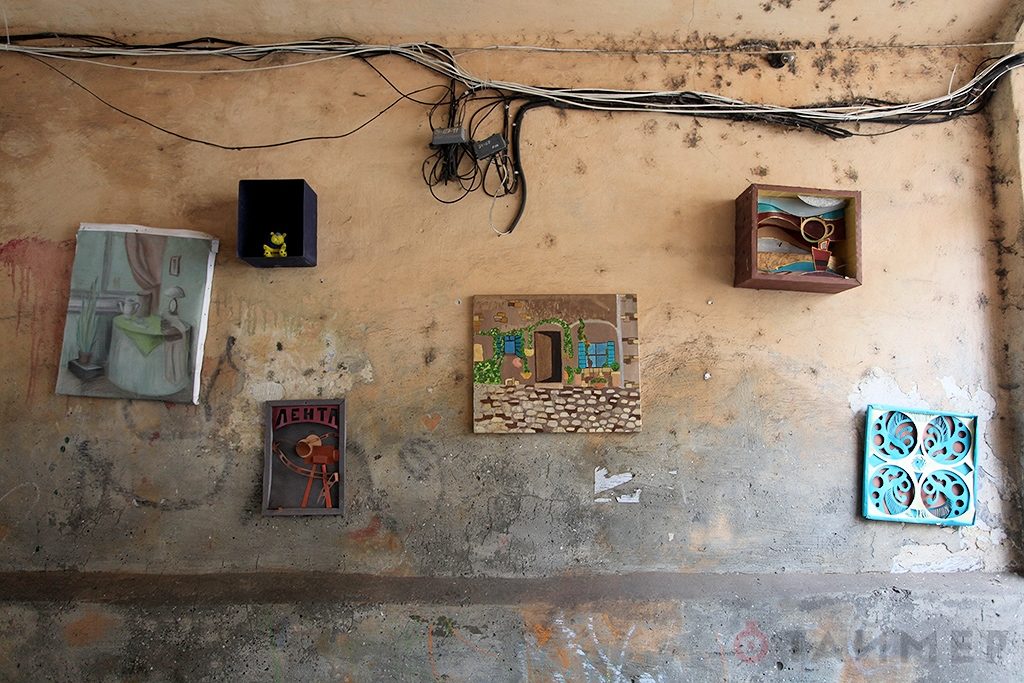 The courtyard of the house №1

How to get there: Arrive at Devolanovsky descent may be at the beginning, the end and use the stairs near the bridge. It is best to go down on it down, so it is recommended to start with a walk Jewish street.

This pond is famous healing mud and mineral springs. But recently, there was an amazing event – the color of the estuary annually changes its color to pink. 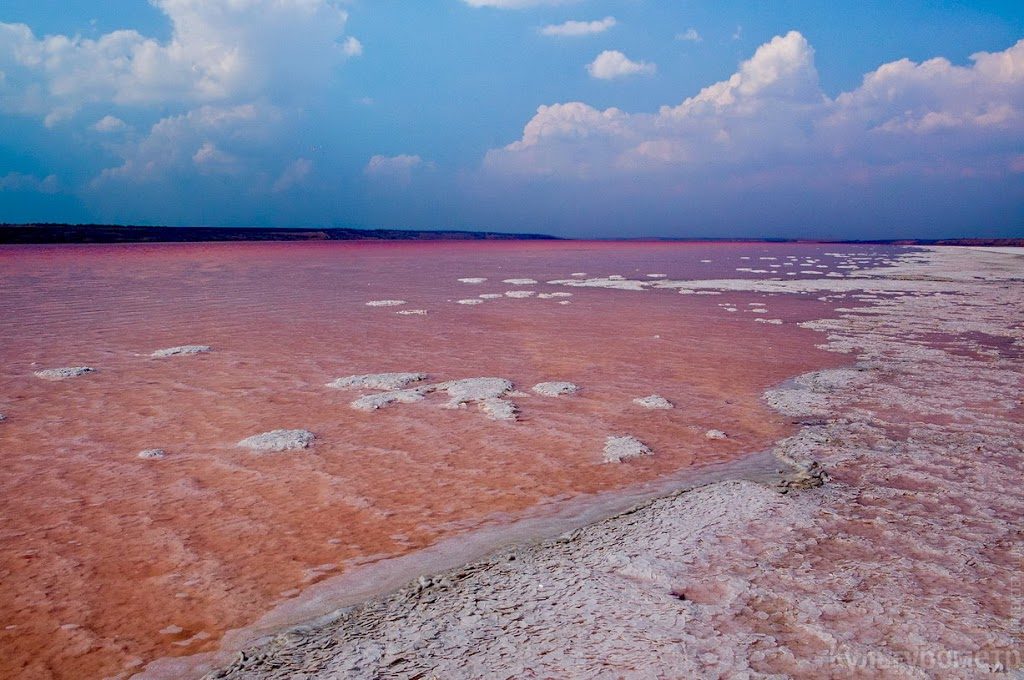 The natural phenomenon is particularly noticeable in the late summer – early autumn, when the water level in the reservoir falls, and the salt content reaches the limit 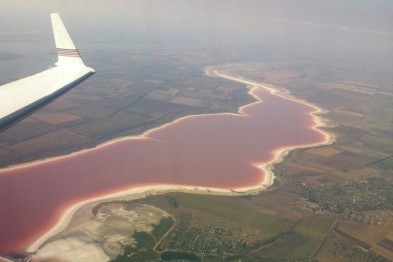 Pink Estuary – view from above

Getting there: We need to sit down on a minibus (number 146, 168, 242, 245) extending along Siltings and get off at “Factory of nonwovens.” Then turn onto the street Lima and go to the end, until you see the pond.

This street is not for nothing called the highway of Health, because it is the place chosen by the inhabitants of Odessa to regular exercise. You often see cyclists, athletes and other athletes. The street passes by the shoreline, so the fresh sea air and beautiful views while jogging are provided. 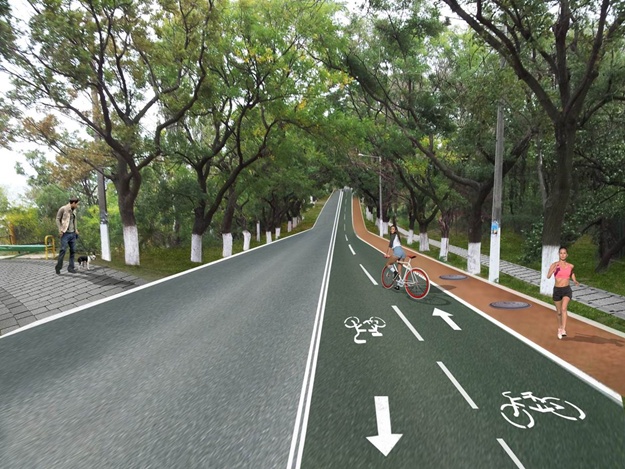 Attention! The street is fully equipped for biking.

It begins this way the beach Langeron and ends Arcadia. Along the way you can look at the beaches of the Small Fountain and joy.

Go through the Health Circuit in the framework of the tourist walks will be no less entertaining, and most importantly, useful. On the road there are many shops where you can relax and enjoy nature. 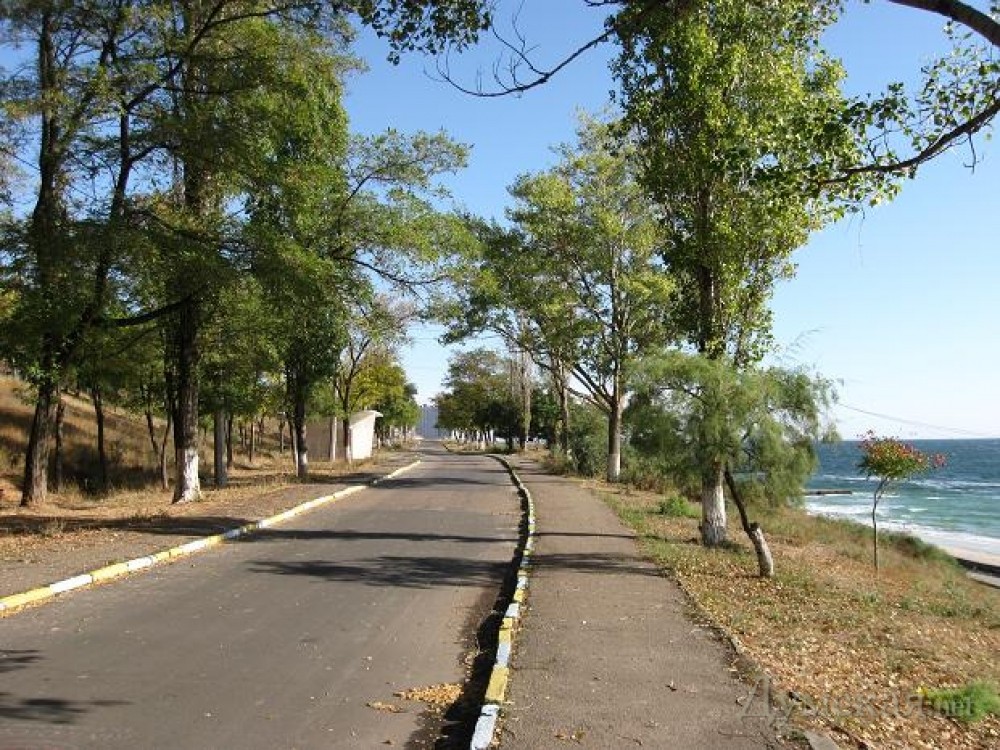 Health track at the sea in Odessa

How to get there: go down on the road can be anywhere in the city streets, running parallel to the track within the area-Langeron Arcadia. But it’s best to use the cable car, which will be discussed further.

The cable car near the beach Otrada

Passing on Health Joy Circuit by the beach, you will notice an interesting building with a tiny multi-colored booths, moving through the air. It – Odessa cable car, open in 1971. 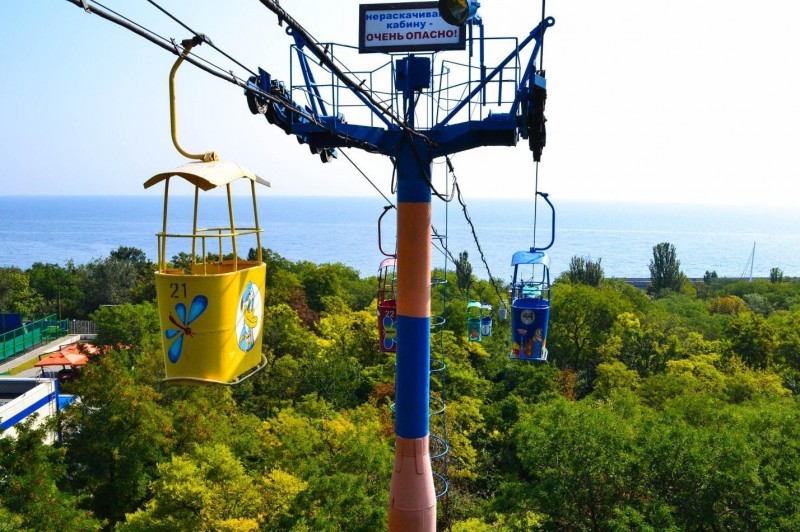 It is designed for the convenience of visitors to the beach, but its main charm lies in the stunning panorama of the sea and surrounding area.

How to get there: From the train / railway station to tramvae№5. Exit at French Boulevard at the stop street. Pirogovskaya. Go through the Moorish arch (this architectural monument is also worthy of attention) and go straight all the time, until you notice the cable car. Below find it even easier – it is located at the entrance to the beach “Joy.”

Near the train station you can stay in our Odessa Hostel – “Friday”. Where is the hostel “Friday” can be found on the page: contacts.

Few people heard about this beautiful street, which runs along the “Langeron” beach. Despite the popularity of the beach, the street unnoticed for most tourists.

The Black Sea has become known for Paustovsky who admired her location and beauty of the local architecture. The house №8 is now his museum, and on the facade of the building a memorial plaque to the writer. 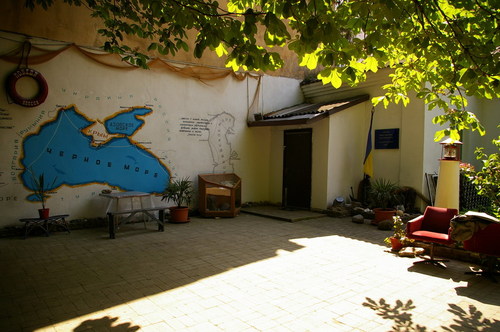 Almost every house on this street has historic value, but the odd side of the street for a long time ceased to exist. The house №11 visited Sophia Tolstaya, a granddaughter of the famous writer Leo Tolstoy. House №21 was earlier hospital Dr. Landesman, known from the books of the same Paustovsky, and at number 21, Shah Mohammed Ali once housed his concubines. Unfortunately, the site of these houses are now flaunts cozy Paustovsky Square.

It is a beautiful view of the sea – was recently undeveloped small observation deck with benches, which is located just in the middle of the street. Where you can escape from the city and spend time reading a book while enjoying the peaceful atmosphere of the street.

How to get there: Go by Lidersovskiy Boulevard to the Walk of Fame, and turn right. Walk past the entrance to the beach “Langeron”. Just around the corner on Main Street alley begins Black Sea.

Memorial of heroic defensive of Odessa 411th Coast Battery is dedicated to the victory in the Great Patriotic War. Memorial is located in a large oak park. In its central part is a museum and exhibition of military equipment in the open air, where you can see the guns of the battery itself. 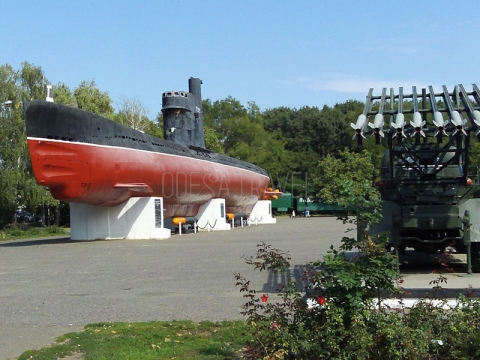 Another attraction of the memorial – sculptural complex “sad memory of the Century”, dedicated to those who died in the war in Afghanistan.

House with one wall

Behind the Vorontsov Palace is one of the most unusual buildings in the city. If you come to the front of the building and look at it directly, it is nothing out of the ordinary, you will not see. But it is necessary to go around the house and look at it from the other side – you would think that the house consists of a single wall. 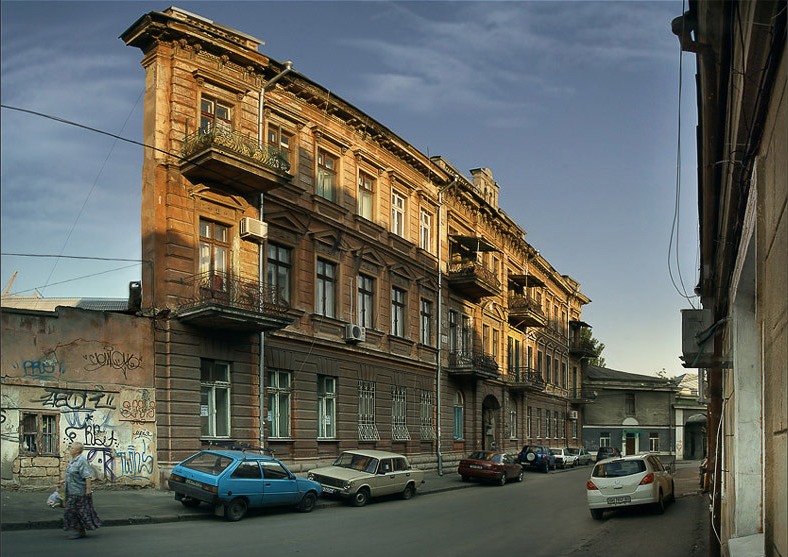 House with one wall in Odessa

But this is only an optical illusion. Secret house is that it has a triangular shape with a certain angle and eyes perceive it flat.

No architectural ideas is not here, because the construction of the fourth wall is simply not enough money.

We hope you enjoy the proposed list of unusual places of Odessa, and by visiting them once, you will get a lot of unforgettable impressions.